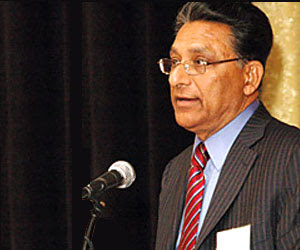 Achievement: Known as the father of the Pentium processor.

Vinod Dham (Born: 1950) is popularly known as the father of the Pentium processor. Born in 1950 in Pune, he had his initial schooling in Pune. He did his Bachelors in Electrical Engineering from Delhi College of Engineering in 1971. Thereafter he had a brief stint with Continental Devices, a Delhi based semiconductor company.

In 1975, Vinod Dham went to the US and did his Masters in Electrical Engineering from the University of Cincinnati. After completing his Masters in 1977, Vinod Dham joined the National Cash Register (NCR) at Dayton, Ohio. Vinod was a team member of the NCR's memory design group. He received many patents for his work at NCR.

While making a presentation at the IEEE conference in Monterrey, California on re-programmable memory, Vinod Dham received an offer from the Intel to work with them. In January 1990, Vinod was in charge of developing the 586 or Pentium processor. He worked relentlessly on the project and the Pentium processor was a big hit in the market. Vinod Dham rose up the corporate ladder and reached the position of the Vice President of the Intel's Microprocessor Products Group. He quit Intel in 1995.

In 1971, after graduation, he joined a Delhi-based semiconductor company called Continental Devices. In 1975, he left this job and joined the University of Cincinnati to pursue a master's degree in Electrical Engineering, where he specialized in Solid State Science. After completing his master's degree in 1977, he joined NCR Corporation at Dayton, Ohio. He then joined Intel and started working on the Pentium chip. He is called the "Father of Pentium" for his role in the development of the Pentium processor. He is also one of the co-inventors of non-volatile flash memory. He rose to the position of vice-president of Intel. He left Intel in 1995, and joined a number of startups including NexGen, which was acquired by AMD, and then went on to Silicon Spice, which was acquired by Broadcom in 2000. He is also the co-founding partner of New Path Ventures which has funded companies like Nevis Networks. In an interview, Dham said that he came to the United States with only "$8 in his pocket".

He was part of the board of directors of Satyam Computer Services Ltd. that approved the purchase of construction company Maytas (owned by the same family that owns Satyam), worth $225 million, for $1.6 billion. The deal was presented to the shareholders as if it were an irreversible decision by the board. Finally, the deal fell apart due to institutional shareholder protests. He resigned from the Satyam board on December 28, 2008.