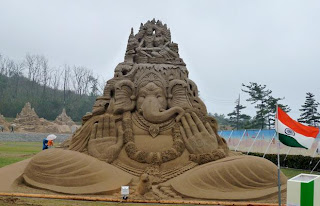 Sudarsan Pattnaik is one of the best sand artists in india.

Sudarsan has created 15 feet high Hindu god Ganesh to create awareness among the people on the potential dangers of global warming at the International Sand Championship.

The top of the sculpture depicted the melting of glaciers in the Himalayas and in the flowing water Lord Ganesh is travelling on a boat with a sign 'Divine Concern on Global Warming'. This was to educate people through his art about the effects of Global Warming.

Pattnaik hails from Odisha and has so far participated in more than 35 international sand sculpture championships across the world and won many awards for the country.

His sand sculpture on Black Taj Mahal earned him accolades all over the world. He actively takes part in social events through his sand art, giving tribute to the cause in his own way.