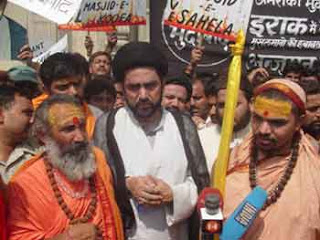 Swamiji was born in a village named Brahmanpur in Pratapgadh district of Uttar Pradesh. During the last some years, he is living with Swami Swarupanand Saraswatiji Maharaj who is Shankaracharya of Jyotish pith in math. He is performing his duties towards math along with doing his study. Swamiji has started doing Sadhana since he is of 5 years of age. He has acquired knowledge of many Holy books till date and he is the editor of one monthly magazine named Shri Mata. The goal of his life is nothing but to obey orders of holy Guru. He is constantly working towards making river Ganga free from pollution and to stop conversion of religion with the help of inspiration from holy Maharaj. Till date, he had liberated lakhs of people by helping them to enter Hindu Religion again. Since last 4 years, Sanatan Sanstha has his blessings for its religious work.

When the heir of Shankaracharya of Jyotish pith: Swami Swarupanand Saraswatiji maharaja
Who is Swami Avimukteshwaranand Saraswati started to aboard the plane of Indian Airlines; antireligious pilot K.R.Sing opposed to keeping Bramhadand with him.
(Such incidents did not happen even in the era of Aadilshahi, Kutubshahi, and Nijamshahi but taking place now in the dynasty of Congress. Ascetic is being opposed to carrying his Bramhadand. Bramhadand is the symbol of spiritual power. Shame on pilot and airlines management who opposed a Dharma guru to keep Bramhadand with him!
Hindus, this is really very shameful for all of Hindus. Unite to make them apologize for such an act. If by tomorrow airlines management is not going to give satisfactory explanation on this then Swami Avimukteshwaranand Saraswati has given warning of Jana-Aandolan. When pilot opposed to keeping Brahmadand with Swamiji and asked to keep it with luggage then Swamiji told him that this Bramhadand is never supposed to be kept aside as per the tradition of Hindu religion and he has not been refused for this in his earlier air travels. In spite of this pilot asked him to get down arrogantly.
(Think about this Hindus! What would have happened if the captain would have tried to behave in the same manner with leaders of Muslim or Christ religion Editor)
Swamiji tried to explain this entire situation to airline management when he got down
But they have not given satisfactory answers. Then Swamiji visited ascetic Ashram at Vile-parle. After this, more than 50 saints discussed the issue with concerned managers.
This time they have been given a deadline of until 12 pm. noon to provide explanation and have been asked to provide written apology and permission to carry Brahmadand in an airplane.
Now the time has arrived to uncover the Brahmadand. Swamiji has warned that in next 1 to 2 days Hindu Samiti will arrange Jan-Andolan and airlines management will be fully responsible for that.

The pilot of the airplane opposed Swamiji like a terrorist when he was getting aboard. This is the insult of Hindu religion. Brahmadand is not only a stick but also a part of spiritual rituals.
Secretary of Swami Avimukteshwaranand told that they have decided to raise a revolution in opposition of this matter.

December 01, 2019
Saravanan Arul is the owner of Saravana Selvarathinam Stores in India. He is the son of late business mogul Selvarathinam who was the founder of the Saravana Selvarathinam Stores and part of the largest family-run business retail chain in India. Saravanan Arul Saravanan Arul who controls different shops of Saravana Stores is now all set to make his entry into Tamil film industry, not as a producer but as an actor, infact as a hero. Saravana Arul who uses "Selvarathinam" logo for the stores under his control has appeared in several advertisements of his own shops. Saravanan Arul's Kollywood entry is almost confirmed and he is reportedly impressed by the story narrated by director duo, JD – Jerry (Joseph D Sami and Gerald) of Whistle and Ullaasam fame. The film will co-star Geethika Tiwary as the female lead, alongside Prabhu, Vivekh, Vijayakumar, Nasser, Thambi Ramiah, Kaali Venkat, Mayilsamy, Latha, Kovai Sarala and Devi Mahesh. The makers of the movie have set
Post a Comment
Read more

November 16, 2016
Are you using credit card or has taken any loan from banks, if yes then get ready to see some additional charges being levied on your credit card EMI or loan EMI w.e.f November 2016. w.e.f November 2016 Govt. Of India has asked the banks to charge extra or additional 15% tax for the interest the bank charges on EMIs. Now, let me explain you this in better way. Suppose you bought a product using your credit card and converted the same purchase into multiple EMIs, earlier before 1 st November 2016, credit card issuing bank used to levy some interest rate on your EMIs and you used to pay the same only along with the actual value of product price divided by the tenure for which you had taken the EMI. Now, WEF 1 st November 2016, all the credit card issuing banks or loan lender banks has to levy another additional tax of 15% (ST 14% + SBC 0.5% + KKC 0.5%) on the interest charged on the EMI. That is another 15% tax burden on consumer. Additional 15% tax on credit card
1 comment
Read more

October 30, 2020
Esther Hnamte , (born 2016) is a girl from Lunglei district of Mizoram, she is a brilliant singer and performer. One of her rendition of AR Rahman's song 'Maa Tujhe Salaam' went viral and taken internet to storm. Esther Hnamte Esther Hnamte Vande MataramEsther Hnamte Vande Mataram The music video features Esther holding the Indian national flag in her hands as she sings the song. The video shows picturesque images from the north-eastern state.  Watch the viral video here: Esther's soulful voice touched the hearts of netizens. The music video has been viewed more than 1.92 lakh times and has garnered more than 28,000 likes. Netizens wished to see Esther and Rahman performing on one stage. Esther posts songs in Mizo, English and Hindi on her YouTube channel. Maa Tujhe Salam is the title song of the 1997 album Vande Mataram. The track also holds two Guinness World Records for being the song performed in the most number of languages.
Post a Comment
Read more

January 07, 2021
We read inspiring stories and get amazed to see some extraordinary talents and sometime hard work achieving a very rare feats. But all these inspirations we get reading these stories help us somehow to grow in our fields as well. Get ready to be amazed by one such rare talent where 7 year old, standard III student cleared an exam conducted by Microsoft and meant for adults. This 7 year old boy Venkat Raman Patnaik comes from a small town Bolangir in Odisha and he cleared Microsoft Technology Associate Examination. It is a globally recognised certification for those who want to embark on a career in technology. Venkat cleared the MTA exam for introduction to programming in Java, Javascript, Python, HTML, CSS and database administration fundamentals.  Although his teacher Jatinder Kaur from private institute WhiteHatJunior credits Venkat's achievement to WhiteHatJunior which Venkat had enrolled since 19th March 2020, but also believes Venkat's achievement is rare and he has a lot
Post a Comment
Read more

October 21, 2020
Anika Chebrolu (born 2006) is a young researcher has won the 3M Young Scientist challenge 2020. This 3M Young Scientist challenge is regarded as the premier middle school science competition in the US. Anika won the prestigious award with an whooping award money of US $25,000. Anika had decided take part in the challenge after she had battled a severe influenza infection last year. Chebrolu since then started working on ways to fight the seasonal flu, but like many professional scientists, her plan changed when the COVID-19 pandemic hit. In order to find her potential drug, she used multiple computer programs to identify how and when the molecule would bind to the SARS-CoV-2 virus. Anika Chebrolu Anika Chebrolu uses in-silico methodology to discover a lead molecule that can selectively bind to the spike protein of the SARS-CoV-2 virus. Anika Chebrolu is an Indian American teenager (a 9th grade student) who currently staying in Texas, USA but her family originally hails from Andhra Pra
Post a Comment
Read more

Know about Ishana a young entrepreneur from Coimbatore

November 13, 2019
Ishana a young entrepreneur from Coimbatore is producing reusable cotton sanitary napkins. Ishana (born 2001, Ganapathi, Coimbatore), started her own enterprise which manufactured and sold sanitary napkins made out of cotton fabric, all she had in mind before starting this workshop was to do her part in keeping the planet green. Ishana's venture that makes sanitary napkins makes use of no chemicals and is wholly biodegradable out of cloth. Around 20 women are employed in Ishana’s workshop. It takes 10 to 15 minutes for stitching one sanitary pad by tailors working at Ishana's workshop and they are paid around 400 rupees for 60 to 70 pads. Ishana is an Eco warrior who is manufacturing sustainable, reusable sanitary napkins at affordable range. Ishana is planning to create a brand and sell sanitary pads from her workshop on E-Commerce websites. Sanitary pads manufactured at Ishana's workshop Namaste India wishes and encourages entrepreneurs like Ishana to come up wi
Post a Comment
Read more