SABKA MAALIK EK!! Meaning there is only one God.
So, true!, Really there is only one god and that’s within you. Go through any number of books, holy books, history books, references almost every scholar, every saint, every peer baba or anyone whom you and people believed and trusted, used to say, that God is one and god lives within you. It’s you who can make your god come alive within you. Sai Baba is not different, he whole his life said one thing, call your god, that lives inside you and that God is one. God lives in everyone. I’m really feeling very contented today while writing this article, I’m very much convinced and feeling devoted. Let me allow to take you to some series of stories about Shirdi Ke Sai Baba, Sai.


Why do people crave to go to Shirdi?

What is so special about a remote village in Maharashtra? Many devotees aspire to start the first day of the year in the auspicious presence of Baba? What is it in the aura of Shirdi that devout wish to stay there forever and never leave?
Answer to all these questions is very simple. To put it in words, as said by popular incense stick brand, BHAGWAN HAI, meaning God exist.


Be it an atheist or a believer of Shirdi Sai Baba, no one will deny the fact that there is something special about the zephyr we get to experience in Shirdi, it makes one feel that one is in utopia, beyond all the worldly bondage, under the canopy of Shirdi Sai Baba. 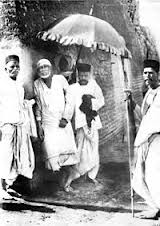 Shirdi Sai Baba became more popular in masses thanks to a Bollywood director Manoj Kumar whose faith was so much into Sai Baba that he made a movie “Shirdi Ke Sai Baba” and portrayed actor Sudhir Dalvi as Sai himself, who did justice and let the world know who Shirdi Sai Baba actually was.

When it comes to knowing the history of Shirdi Sai, till date it is not clear whether Baba was a Hindu or a Muslim. This is because almost all Hindu Gods have their ears pierced and Shirdi Baba had not pierced his ears. Baba used to praise Allah as well as Ishwar(Lord Shiva).

However, a popular website of Sai Baba states that Baba was born in a Hindu family to a couple named Gangabhavadya and Devagiriamma. In the former Nizam's [Maharaj] dominion, there was a remote village called Pathri. In that village, there was a couple named Gangabhavadya and Devagiriamma were grieving over the lack of children. In answer to their prayers, a son was born on September 28, 1835, who we today remember as Shirdi Sai Baba. As Gangabhavadya had developed a feeling of total detachment and renunciation, he decided to retire to a forest regardless of the child. Devagiriamma, who looked upon her husband as God, decided to follow the husband leaving the child.

In the same village, a Sufi fakir who was also childless took charge of this child and brought him up in his home. The boy stayed in the fakir's home for four years (1835 to 1839). The fakir passed away in the tide of time. The fakir's wife, who had dote for the child, was grief-stricken. To add to her woes, the boy was behaving in a troublesome manner. In those days, Hindu-Muslim differences in that area were growing alarmingly.

As a child Shirdi Sai Baba was extraordinary. In those days of bitterness between members of the two communities, Shirdi Sai Baba used to sing about Allah in a Hindu temple and about Rama and Shiva in a mosque. This was certainly a puzzle to the public. People started grousing about Shirdi Sai to the Fakir’s wife. Unable to deal with the situation, fakir’s wife handed over the child to a high-souled, pious scholar named Venkusa, who was living near her house. The boy stayed in Venkusa's ashram for 12 years from 1839 to 1851. Venkusa was extremely fond of the boy. He used to give priority to the young Baba's views. Seeing this, members of the ashram developed hatred towards the boy. Finally one night in 1851, the boy left the ashram. He reached Shirdi, a very small village at the time. He stayed there for barely two months and then went about wandering from place to place.

Baba lived as a fakir for the rest of his life. He was so generous that he used to serve the poor first and would then eat the left meal. The best thing about Sai Baba was he wanted to inculcate a sense of unity amongst the Hindus and Muslims, but people never got a clear idea of what his identity was. He was asked "What is your religion?", he replied "The religion of God.", "Where from did you come?" he replied "I have come from the Atma (soul)", and finally they questioned him about his caste, to which he politely said "The caste of the Divine."

In his early days, Shirdi Sai Baba was called "Sai". In this examination, he had given his father's name as Baba. The combination of these words gave him the name "Sai Baba".

In and around the remote village of Shirdi, there were no proper facilities for a living. People used to get sick and have various ailments. But Baba would perform miracles and cure them. Seeing this the despondent masses turned into a steadfast believer of Baba and revered him as God. Baba was also well known to produce holy ash (vibhuti)and used to give vibuti to all the devotees. Woes vanished, sick got ruddy or health and happiness prevailed under the presence of Baba. Popular stories state that Baba even made a blind man see and hence people started calling him "Man of Miracles". Baba's power was evident in the fact that he manifested oil in the diyas for a poor girl who wanted to celebrate Diwali and had no provision for oil. In the movie Shirdi Ke Sai Baba, it is shown that Baba used a stick to create "Agni" (fire) out of a stone.

Stories state that Baba used to take all the sufferings and diseases of the destitute and give them a happy life. As time passed; Baba came to know that his death was approaching near and during moribund, he handed over a few gold coins to his devotee named Laxmi.

THERE IS SOMETHING UNKNOWN AND POWERFUL ABOUT SHIRDI SAI BABA.

Despite the practicality of today, why is it that people have impeccable faith in Baba? This is because it is believed that whatever is asked with a true heart is granted by Shirdi Sai Baba.

Baba doesn’t want any sacrifices or any offerings, all he wants is pure love from devotees.

One of my favourite thought of Shirdi Sai Baba or Om Sai Ram is:


Which loosely translates to:


If you want to know the truth, the truth is that the one who provides food to the hungry, he/she actually offers me that food. This is a definite truth.